theSHEword 2018: Why we still need to campaign for gender equality 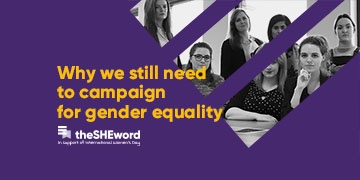 A century has passed since the historic victory for women’s rights, when the Representation of the People Act confirmed their right to vote. But, 100 years on from the legislation’s acceptance, there are still doubts over whether gender equality has truly been achieved or if there is still a long way to go.

In the hope of shining a light on this ever-present topic, theEword is set to mark International Women’s Day for the second year running with a temporary rebrand to ‘theSHEword’. The special week-long campaign will kick off on Monday 5th March and involve an overhaul of the logo, website and social media channels to reflect Pantone’s colour of the year – ultra-violet. Some of the team will also be dyeing their hair purple – one of the official colours of the Suffragette movement.

Here, we bring together some of the people who have driven theEword’s pro-women rebrand to discuss the position of women in the 21st century, why the campaign holds a special place in their hearts and what their hopes are for the future.

“Our gender does not define us. I support International Women’s Day in the belief that one day soon we will have achieved real and meaningful gender equality. We should be praised for our qualities and achievements – it’s not just our bras that should be giving us support!”

“A while ago I came across the old phrase ‘behind every great man is a great woman’, and thought it should read ‘beside’ instead. That's what I think gender equality is about. I chose to get involved in theSHEword campaign because I want to celebrate the massively influential women in my life.”

“I chose to get involved with theSHEword campaign because I’ve come into contact with some genuinely inspirational women throughout my life. Whether it’s the influential figures in industry or seeing how mums can manage about a million things at once – women deserve more credit than they get, and I hope this campaign highlights that.”

“In an ideal world, we wouldn’t still be campaigning for gender equality in 2018, but here we are, so I think it’s important that we all do our bit. I’m getting involved with theSHEword campaign this year because I think it’s a great way to start a conversation in the office about the topic, and seeing how keen everyone is to get involved gives me hope of a more equal future.”

“theSHEword is proving that feminism isn’t a dirty word or a stuffy movement that’s long since had its goals realised. We’re proving that there’s a long way to go, but also that it’s a movement with passion and creativity behind it. I hope that our work to support International Women’s Day 2018 will reach and educate more people and contribute to the wider fight for global gender equality.”

"I support theSHEword because, well, why wouldn’t you? I grew up with strong female role models. Women that I looked up to as a child and look up to even more now I’m an adult. Growing up, the concept of inequality between the sexes just did not exist in my family. In my professional career, sadly, I’ve seen sexism at play but fortunately, I have seen far more examples of fantastically talented women, women who deserve the support of campaigns such as theSHEword that will, as far as its scope will allow, further the cause."